Page vs Screen: Technology in the Classroom isn’t Hobson’s Choice! 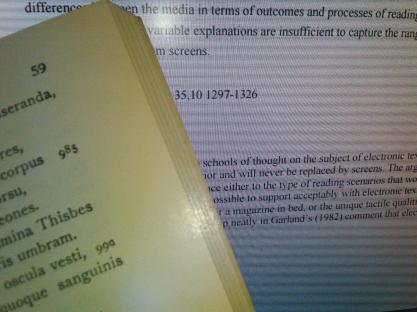 It seems to me that in any class I teach there are three distinct groups of students: one consisting of enthusiastic adopters of digital technologies; a second group of those comfortable enough with the technology, but rather less gung-ho about it; and finally a group which struggles with anything to do with a device, and is all at sea. I gave my grade 8 English class a writing task the other day, and told them they could submit digitally, or on paper. A large group reached immediately for their devices, but some put their tablets to one side, and took out pen and paper. Likewise, when it comes to reading, most of my students have a textbook, but a few use eBooks downloaded on their kindles.

This is, I believe, exactly what it should be. The introduction of technology in the classroom should never amount to an all or nothing affair. The research on the effects of reading and writing on page and screen is by no means conclusive, and with something as important as reading and writing, I believe we should be very cautious about any change. On the other hand so much reading and writing is done on devices these days, we would be ill-advised to ignore it. My common sense, unscientific intuition is that both page and screen form important modalities for literacy practices, and that we need to cultivate good habits in both.

I try to give my students opportunities throughout the year to read and write on page and screen. This has some obvious advantages. When my students are writing in Google docs I can view and comment in real-time, as the writing is happening. This allows me to engage with the process of writing in ways which are more constrained on paper. But I do worry that writing on paper may well be developing other skill sets, such as fore-planning, which screen writing might be eroding. So I make sure that we do writing on paper as well. And sometimes I give them a choice. I have to admit that this is all hope and pray for the best – I have no idea what I am doing. But I do hope that by mixing things up sufficiently, hit and miss tactics will result in more hits than misses.

The time has come to start developing a comprehensive notion of what it means to read or write on the screen, and how to teach good habits towards hypertextual reading and screen writing. here are some initial thoughts:

At the moment very little work is being done in developing ways of teaching and assessing these different modalities. I suspect language teachers are largely winging it, as I am, but we do need to start addressing these issues before we lose a generation to bad page and screen habits!

At the heart of poetry lies the image, that highly condensed, often deeply metaphorical carrier of the meaning of the poem.

One of the chief difficulties faced by any English teacher when trying to help a class learn how to read the imagery of any poem, in conjunction with the formal aspects of the poet’s craft, such as the use of enjambment by William Carlos Williams in the iconic imagist poem above, is that students struggle to lift the image off the page. It is presented to them as words on a page, and at one level they need to keep that in mind, but they also need to learn how to deconstruct an image and explore the associations and references in relation to the formal structure of the poem. Experienced readers are able to superimpose a template of one layer upon another and unlock nuggets of understanding. But most students are either too literal in their reading of the poem, or are not able to extract an image from the words on paper.

Lines of a drawing and lines of a poem.

Using pictorial representations of the imagery is one way a teacher can try to make the words come alive, and help the student make concrete what often appears as a senseless string of words. Before I had access to an Interactive White Board, I used to draw the images from a poem on the board, or ask students to draw what they saw in the lines. Google images, however, allows you to search, or get a class to search for images of what is mentioned in a poem, to discuss as a class which images best matches what the poet is presenting to us, and to build a collage of images which can be used to unlock the poem.

When students argue about which image best represents what the poet had in mind it makes a powerful statement about the nature of the inter-relationship between the poet’s voice and an individual reading of a poem. But more than that it allows a teacher to explore how images are deconstructed by devices such as enjambment. In the poem above, the way the lines are broken up presents a reader with new ways of reading the image.

The third line, for example, presents us with “a red wheel”, which changes our perceptions of the colour of the wheel from the image as a whole “a red wheel barrow”. One interpretation is superimposed upon another, and new possible readings of the poem are uncovered.

So much depends on how we read the poem.

Interactive White Boards offer ways of quickly finding and displaying images in visible forms for a class discussion. I like to select a student who is responsible for finding images of what is being discussed and displaying them for the class to see. Students will shout out advice and get far more involved in unpacking the imagery of a poem, than if only the dry words were used.

A great activity is to get students to create presentations linking the words with images they have searched. I often get students to create collages of poems they have chosen, and present them to the class with a discussion of the poem. I think it also helps students see tools such as PowerPoint or Prezi as visual adjuncts to their commentary rather than simply slides which they read out. 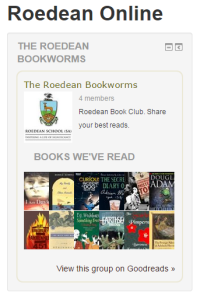 As an English teacher I have always run book clubs as a way of encouraging reading for pleasure. Some kids loved it, some hated it, and the logistics were always messy and complicated. Kids would forget to bring in a book on the right day, and it never really had the effect I wanted – getting kids to read more. A few days ago I had a bit of a brain wave – why not create an online book club? After a bit of research I decided to use Goodreads. You can set up a free user account, and can even add an app to your phone which allows you to scan the ISBN number to call up all the details of a book. Users can rate books on a five-star system, add reviews and share recommendations. The site also allows you to set up private groups so it is perfect for a school.

Better still you can generate a widget which you can post on your blog, website or moodle page which pulls through books being recommended by group members – keeping the book club visible at all times. You can also run discussions, events and polls within the group. I have only just  set up the group, but already I can see that its potential far outstrips the once a term bring in a book to share approach I had been using before.

What sites,and apps like Goodreads does so successfully is bring together the real and digital worlds in a seamless manner. I have no doubt that the students I teach will do a great deal of reading online, but I do not believe that print books will die, and research seems to indicate that the cognitive benefits of print reading are enormous. Print supports sequential reading, the development of a coherent argument. On screen reading can be sequential and narrative, as in reading a novel on your kindle, but print seems to encourage a sense of knowing where you are in the logical train of thought. Screen reading also supports hypertextual readings which allow people to rapidly assimilate a wide range of inputs and get a sense of a field. The future will be one in which both types of reading, sequential narrative reading largely done on paper, and hypertext readings largely done on-screen, both have a role to play. Reading for depth, and reading to synthesise large amounts of information are both important cognitively and are supported by different delivery systems.

What I think an online book club adds to the mix is a commitment to valorizing both page and screen and making reading accessible to the ways in which we share our ideas via social media, and how this can be connected to the classroom.