RSS
← The Benefits of Chess
In Search Of The Holy Grail – How do ICTs foster Critical Thinking? →

Moodle vs Google – King Kong vs The Kraken 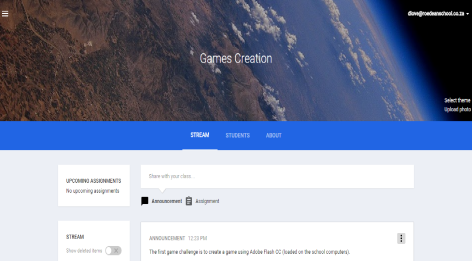 In a previous post I compared Moodle and Edmodo. I’ve been playing around with Google Classroom and would like to make a preliminary comparison. First off I must declare my bias towards Moodle, which I have been using for many years. When Google Classroom arrived last year, with much fanfare and great expectations I felt, for the first time, that it might seriously challenge Moodle for my affections. It had so many potential advantages, after all – the weight of Google behind it for one, and the hopes that the collaborative power of Google docs could be leveraged behind a Learning Management System which could offer a serious alternative to Moodle.

I have to say that it hasn’t quite panned out that way. Although Google Classroom is clearly evolving, the same is true of Moodle, so one can only compare where they are currently, and I have to say that I am somewhat underwhelmed by Google’s offering. Moodle is often criticized for having a clumsy interface, and yet one of the most annoying features of Google Classroom is that you have to poke around Google Drive to even find it! Maybe I’m just a wee bit stupid about using Google Drive, but I find it hard to find stuff that I haven’t bookmarked. It’s almost as if the seamlessness of integrating Classroom into your Google experience is a bit too seamless. I end up using the URL to get there, as I do with Moodle, so despite the potential advantage, for me at any rate it’s honours even in terms of finding the page.

Creating a Course was easy, though: considerably easier than with Moodle, which requires the Moodle Administrator to set one up for you! However, this ease of use is balanced by a severe inability to customize the course! Moodle gives you many options, and with a bit of HTML you can tweak the page to suit your needs. Classroom lacks all this – what you see is pretty much what you get! You can choose a theme, and that’s about it really! And this goes to the nub of the difference. For those who need a quick, painless LMS, easy to use but light on power, I suspect Classroom is a God-send, but for those a little braver in their approach to technology the power of Moodle will undoubtedly prove more attractive.

Adding Announcements and assignments to Classroom was extremely easy, and again edges ahead of Moodle, although the greater number of options available in Moodle counter-balance this. One thing which annoyed me about Classroom was that one attaches resources such as files, video links and URLs to a single assignment. In Moodle one attaches resources and assignments to course segments, which appears far more logical to my mind. I teach in units, which contain resources and assignments, input and output if you wish, and each unit can be as small as a single lesson, or as large as a term’s work! Moodle is very flexible in this regard, while Classroom is not! This, to my mind is what ultimately puts Moodle out in front. It works the same way teachers think.

While Classroom has the supreme advantage of integrating well with your google account, a point I grant despite my own struggles in this regard, it does raise some issues. Our school runs a Windows environment with roaming profiles allowing students and staff to log on to any computer on campus or via the wi-fi using their device. In some instances this creates problems using Google Chrome as Internet Explorer is automatically set as the default browser over our network, something my network administrator tells me he cannot change. This means that on occasion Google accounts do not log off, or Chrome will not access the Internet. I cannot pretend to understand the whys and wherefores of this, but it does complicate matters., Having said that, our school Moodle is also offline occasionally, and so it’s pretty much honours even there too!

In summary then, on Classroom I found I could easily set up a course, invite students to join, add an assignment and make announcements, and attach resources to both. I could view student’s uploaded work and grade it, and download the grades as a csv file. The grading was somewhat clunky and awkward, however, and not that intuitive when all is said and done. What I couldn’t do, as I can in Moodle, is organise students into groups, give a single grade to a group, and enable peer assessment. I could not set up conditional loops, activating certain follow-up assignments when students failed an assignment, or activating enrichment tasks when they passed, for example.

Classroom has nowhere near the power of Moodle, but I can’t help thinking that with the weight of Google behind it, Classroom might well represent something of a slumbering Kraken, waiting to be roused from its sleep!

← The Benefits of Chess
In Search Of The Holy Grail – How do ICTs foster Critical Thinking? →

3 responses to “Moodle vs Google – King Kong vs The Kraken”

This site uses Akismet to reduce spam. Learn how your comment data is processed.